The End of Windows 7

Windows 7 continues to play a major role in businesses around the country. According to Net Market Share’s data for December 2018, Windows 7 still constitutes 36.9% of the market share, while Windows 10 has just edged it out at 39.22%. As of August 2018, Windows 7 is still used by nearly 45 percent of businesses in the United States. Many businesses continue to use outdated operating systems in order to avoid the troubleshooting and expense of implementing new systems. Simply put, many businesses do not feel the need to fix what isn’t broken. Despite the success and prevalence of Windows 7, thousands of businesses will have to update their operating systems to Windows 10 and adjust their workflows to take advantage of its new features.

If you'd rather we deal with this so you don't have to, let us know! Schedule a discussion here.

What Does End of Life Mean?

Each Windows operating system prior to Windows 10 has gone through the same three-stage life cycle as Microsoft fixes bugs, designs updates, and eventually releases a new operating system.

Microsoft provides security patches and new features for several years after the initial release of a Windows operating system. This life cycle is intended to ensure that the new operating system is optimized.

Microsoft no longer actively develops the operating system and instead releases periodic updates to keep the product running well and secure.

What Does It Mean for My Business?

End of support has several implications for business operations. The largest liability associated with running outdated operating systems is increased vulnerability to cybercrime and viruses. For example, in 2017, WannaCry ransomware infected millions of computers around the world, threatening to delete the users’ data unless they paid large amounts of money. However, in the months before the attack, Microsoft released a patch that protected against WannaCry. The computers running outdated Windows XP didn’t receive the patch, and as a result, were infected. Simply put, running an outdated operating system doesn’t just decrease efficiency; it’s unsafe.

Upgrading to a new operating system requires planning for the transition to run smoothly and without significant disruptions to business operations. First, businesses need to budget for the systems upgrades. In addition to buying the new operating system for its computers, if the current computers do not meet these system requirements to run Windows 10 Pro, then the business will also need to buy new equipment.

Businesses also should plan for a period to troubleshoot any problems that arise with the new operating system. Often, business apps may need to be adjusted, updated, or otherwise accommodated in order to run compatibly with a new operating system. If the business app simply cannot run on Windows 10, then businesses will need to explore different software. This is an important reason to consider updating some of your computers to Windows 10 as soon as possible so you can work out any problems before you’re forced to upgrade all of your computers to the new operating system.

Finally, businesses should plan how they will migrate their data to a new operating system securely and efficiently. While individuals can easily migrate their data from one computer to another, businesses handling larger quantities of data face and increased risk of losing or corrupting data or even exposing it to unsecured environments where cybercriminals can access it. Businesses handling large amounts of sensitive data, such as personal and financial information, may want to consider using third-party services for secure storage and migration.

The most effective way to ensure that your business successfully adopts Windows 10 is to consult knowledgeable IT professionals. By tapping the deep expertise at Dymin Systems, businesses can access 24/7 IT services including on-site and off-site computer repair, network maintenance, software support, and more to help smooth the transition to a new operating system. Visit Dymin Systems' website or call us at (515) 412-7121 to learn more about upgrading your company’s operating system and augmenting your business performance! 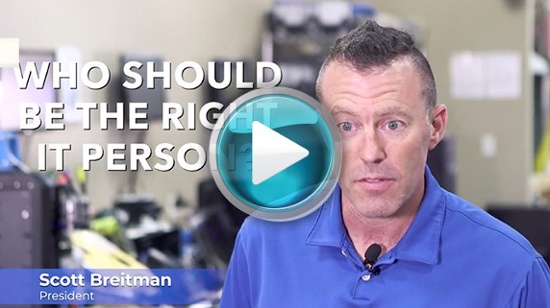